Celebration of the National Day

The 60th anniversary of the proclamation of the Republic of Niger has been held this year in Zinder.     . 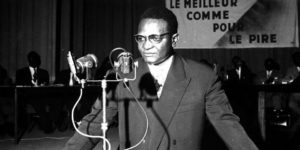